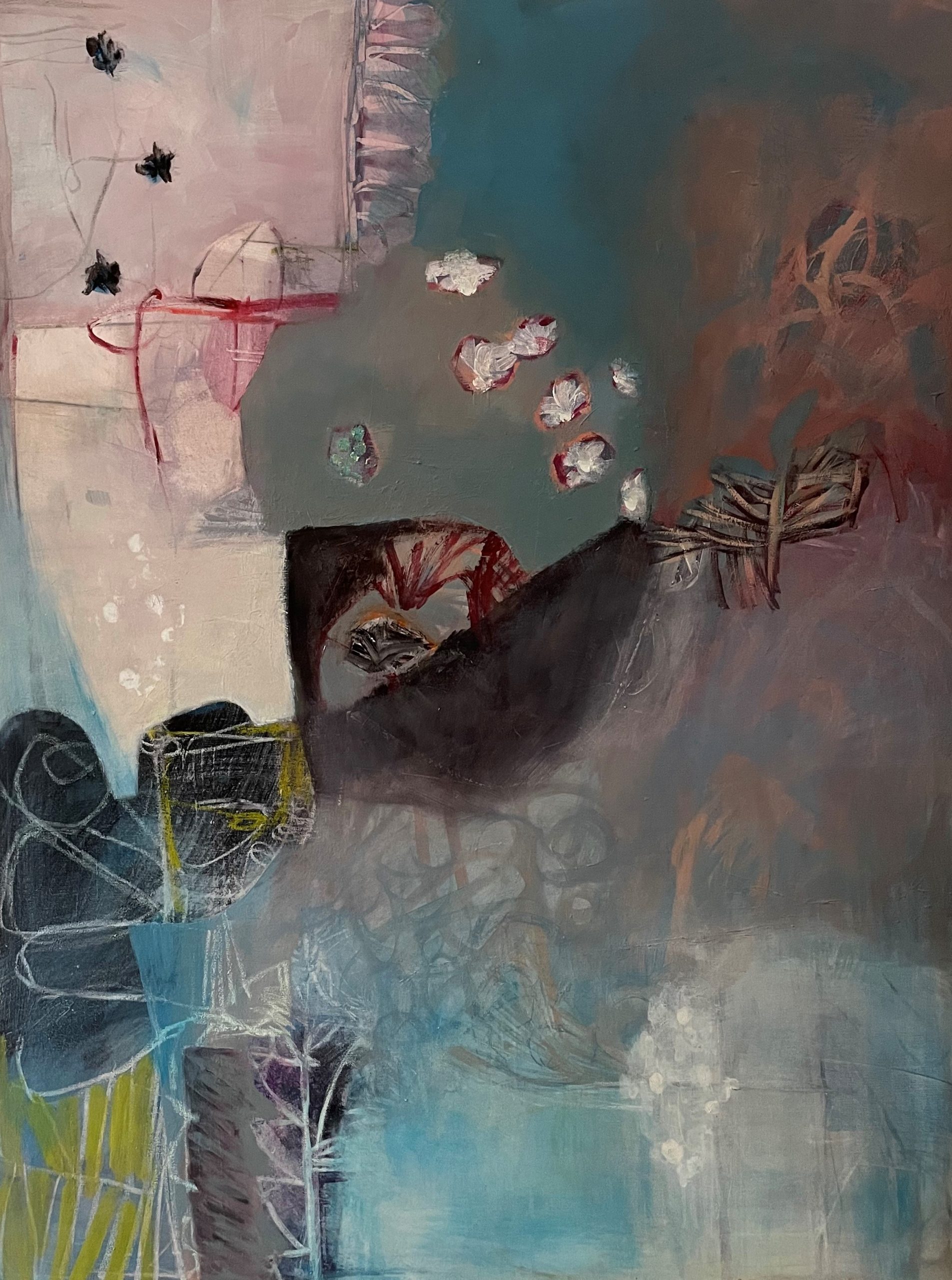 Haven Interiors Studio (Geneva, Ill) is featuring a collection of original art from Sarah Van Beckhum. Her art is full of abstractions but also reveal imagery suggestive of something more established and concrete. Each painting is an offspring of Sarah with a distinctive personality. For additional information about the artist go to www.sarahvanbeckum.com

The event is a collaborative effort of the Fine Line Creative Arts Center, St. Charles Arts Council, and Water Street Studios and was created in 2018 with the mission of promoting arts and culture in the Fox River Valley. Further details can be found at www.foxriverarts.com 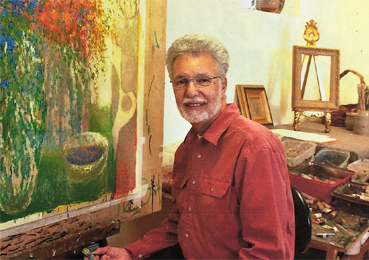 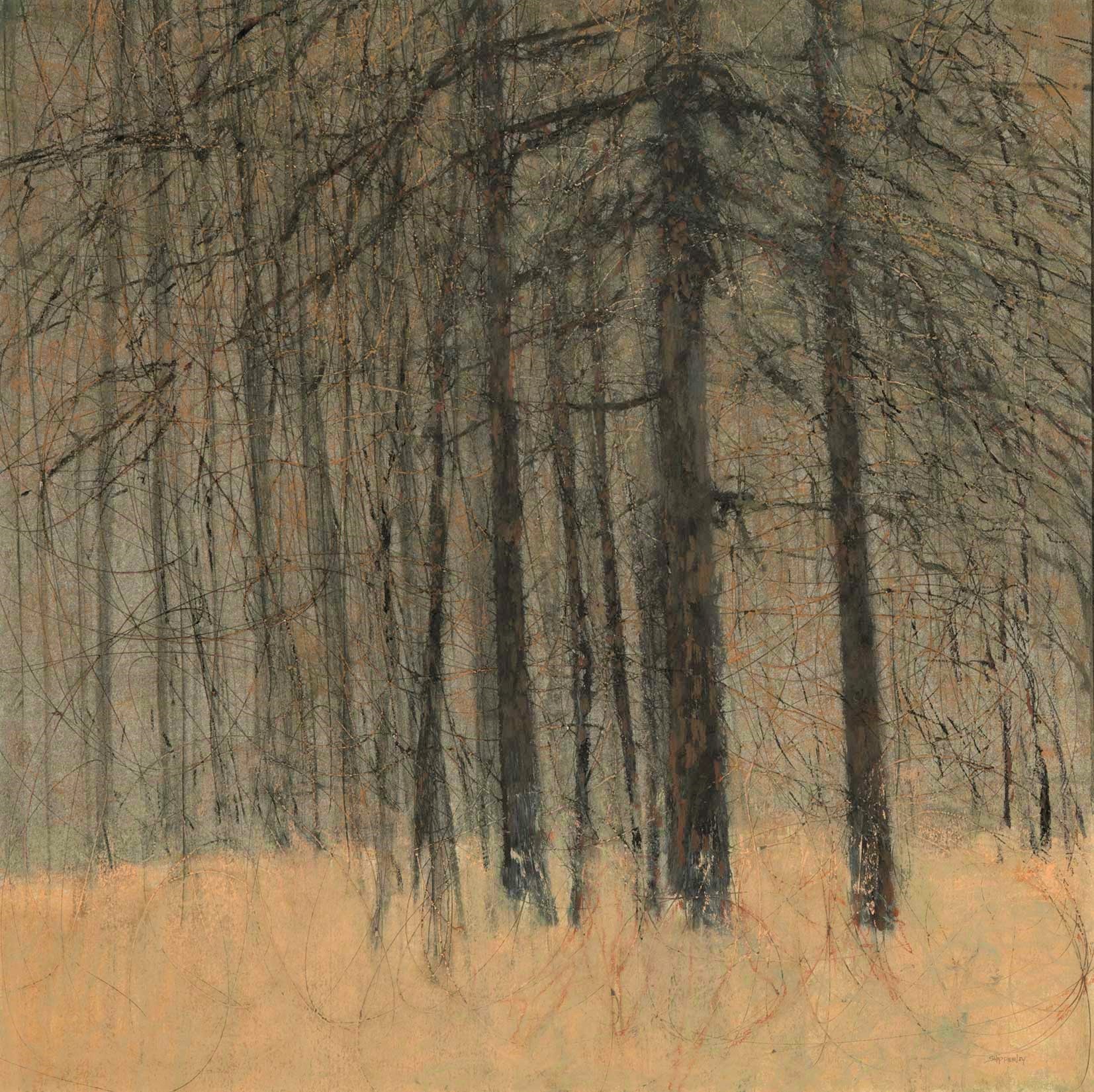 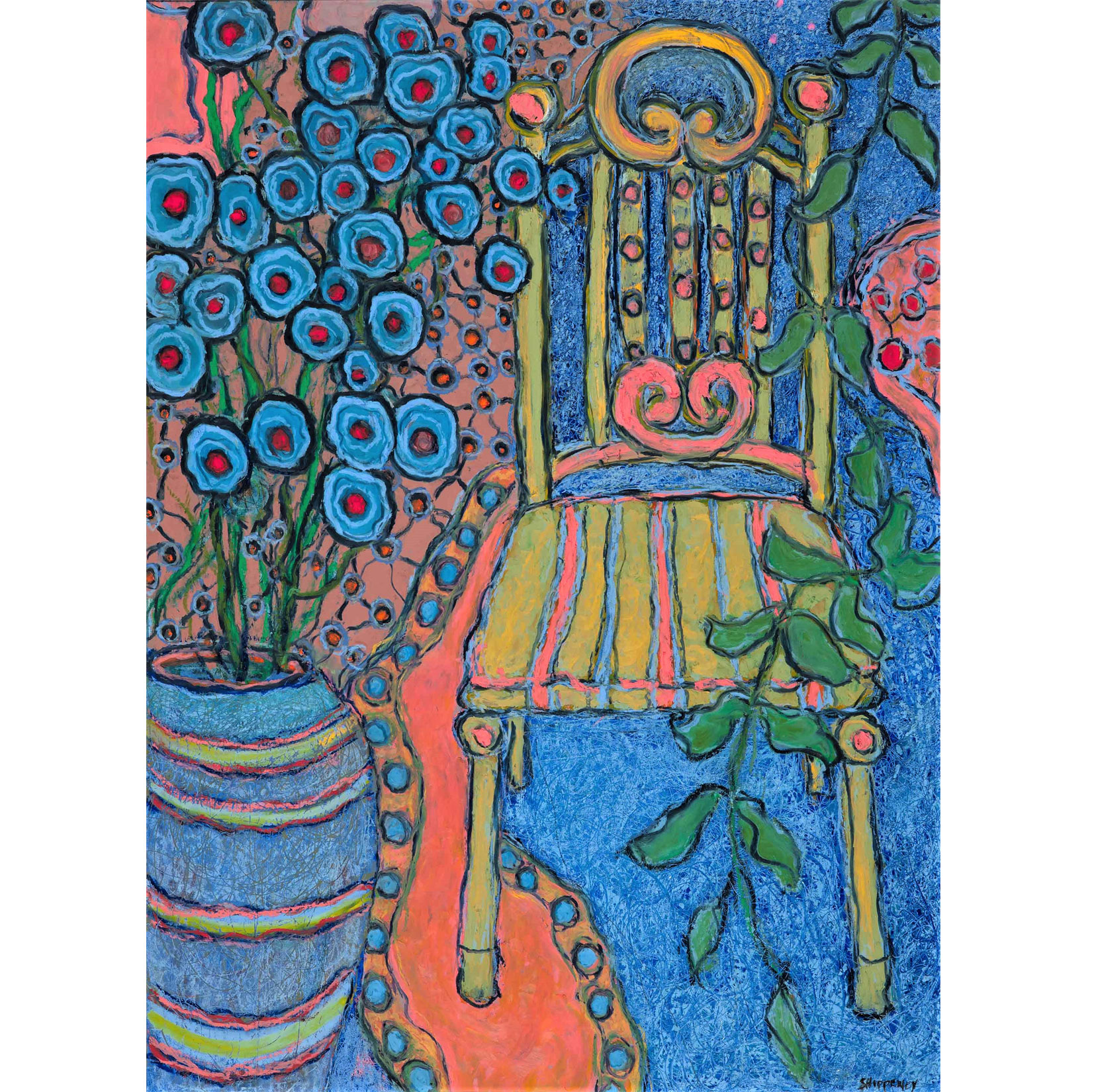 About The Artist
Fox Valley Arts Hall of Fame 2014, Winner, the Artist Magazine over 60 Art Competition 2013. First place in the signature class 2011, Oil Pastel Society. Featured in The Artist Magazine Jan/Feb 2011. Shipperley is a resident of Aurora and his works are inspired by “the poetry of nature, especially trees and how they relate to one another.” He believes the essence of a good work of art should reflect poetry and grace that stirs one’s emotions. The medium of choice that best reflects Shipperley’s interpretation is oil pastel.

Lucy Slivinski is a Chicago based critically acclaimed sculpture, installation artist, and lighting designer who works with found materials to create conceptual work that inspires human connectivity. For over 30 years she has drawn upon ideas of recycling, regeneration and innovation. Her work seems at once challenging and inviting asking us to consider the materials to be more than objects of consumption and waste but, more importantly, tools that generate and encourage energetic, physical engagement. Through Slivinski’s inventive transformations we can see a natural order, rhythm and vibration, much like music, that transcends its utility into works that inspire us with new energy and hope for the future. Please visit,http://www.lucyslivinski.comfor more information.

Bio – Based in Kane County, Laura Stoecker is a photojournalist and portrait photographer with 25 years of experience in the field. This collection of abstract photography were taken adhering to strict photojournalism ethics. I create abstracts of reality in the purest form; their natural state. All images were created within the camera (not in photoshop) and the brilliant colors are true to life. These are honest documentations of nature and objects, seen with a photojournalistic eye and photographed in a fine art style. To me, life is already beautiful as it is, there is no or reason to digitally modify it.

Images in this collection range from extreme close-up studies of light, colors & patterns, to experimentations with my equipment creating unconventional imagery of nature & light. Some photographs are details of objects, other incorporate motion, some are aerial images while others are details from architecture across the world. If you’d like to know what a particular image is, I’ll tell you; otherwise I’ll let the mystery remain.

The photographs are printed on Japanese rice paper & hand mounted on clear, floating acrylic in-house. This display allows light to penetrate from the top and side, and when the light shines just right, they glow. Depending on where they are mounted and when sunshine hits them, the pieces can have an everchanging display throughout the daylight hours. Additionally, when displayed on light colored wall, the fibers in the rice paper blend in. They are fluid in their display and depending on how they are displayed, the owner can have an interactive experience with the artwork.

Exhibit Reception: April 17, 4-7pm, opportunities for both visual and verbal dialogue with the art and artists. Curator led tours of the art, along with appetizers, refreshments. 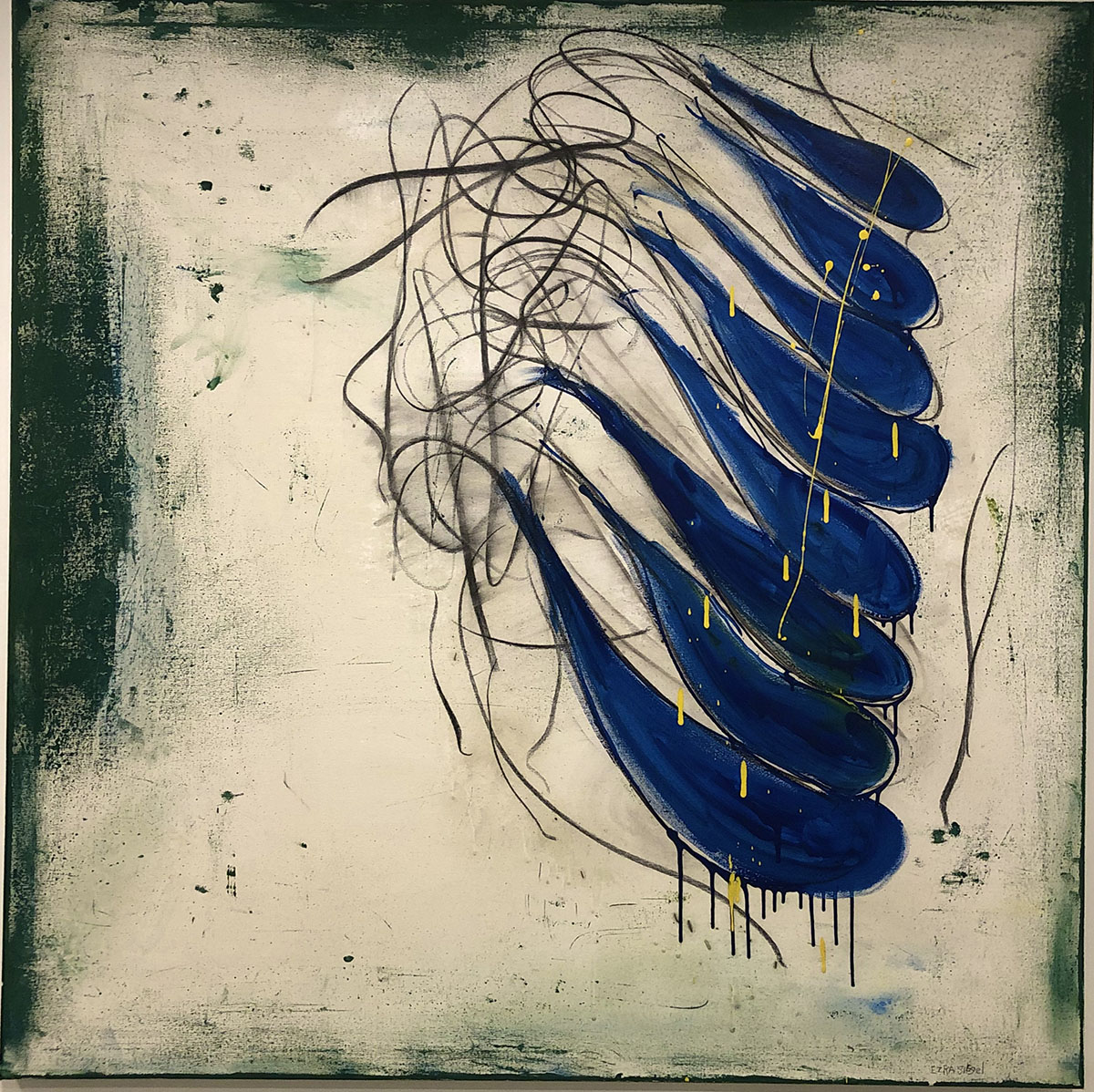 Bio – Chicago-born artist, Ezra Siegel, comes from an artistic family. His father, Arthur Siegel, a world-renowned photographer and his mother, Irene Siegel, is a multi-media artist. At an early age, Ezra took an interest inn architecture. He graduated from Vasser College, majoring in Art History and Architecture. To copy the great master drawings in the Uffizi, he moved to Italy. He then lived in Portugal and Canada before returning to the Chicago area. As a self-trained artist, Ezra has spent many hours visiting museums and perusing art books. These various influences have informed Ezra’s art.

He has shown in New York, in one-man and in group exhibitions. He has also shown Internationally, both in group shows, such as Mae D’Agua, and in gallery representation. Ezra has won Best of show: Bayou City Art Festival Downtown 2016, art and Big Fork 2014, Lubeznik 2013/2019, Northbrook 2013, and has received recognition from numerous juries such as Illinois Arts Council and Art Loop Open. Ezra currently has Gallery representation in Michigan, Massachusetts, Florida, Texas, Oklahoma, Utah, Minnesota, and Illinois.

Artist Statement – I begin the canvas by preparing the surface with a homemade gesso ( a mixture of paint and plaster). This mixture allows me to control the degree of smoothness and absorbency of the paint surface. This is key to my technique which follows up with multiple layers of washes and thin paint (sometimes up to 30 layers). This allows me to create subtle and nuanced color and tone.

I’ve spent 30 years of exploring forms, shapes and paint surfaces to create something that is both simple and complex. The more time spent with m paintings, the more potential they have to stimulate the emotions and intellect of the viewer.

Haven Interiors Studio & Gallery is a participant in the 2020 Fox River Arts Ramble that takes place Saturday June 6, Sunday June 7. This is a two-day self-guided arts tour featuring numerous arts-related locations from Aurora to Elgin. More information on the Ramble can be obtained at the website www.foxriverarts.com

Exhibit Reception: February 21, 4-7pm, opportunities for both visual and verbal dialogue with the art and artists. Curator led tours of the art, along with appetizers, refreshments. 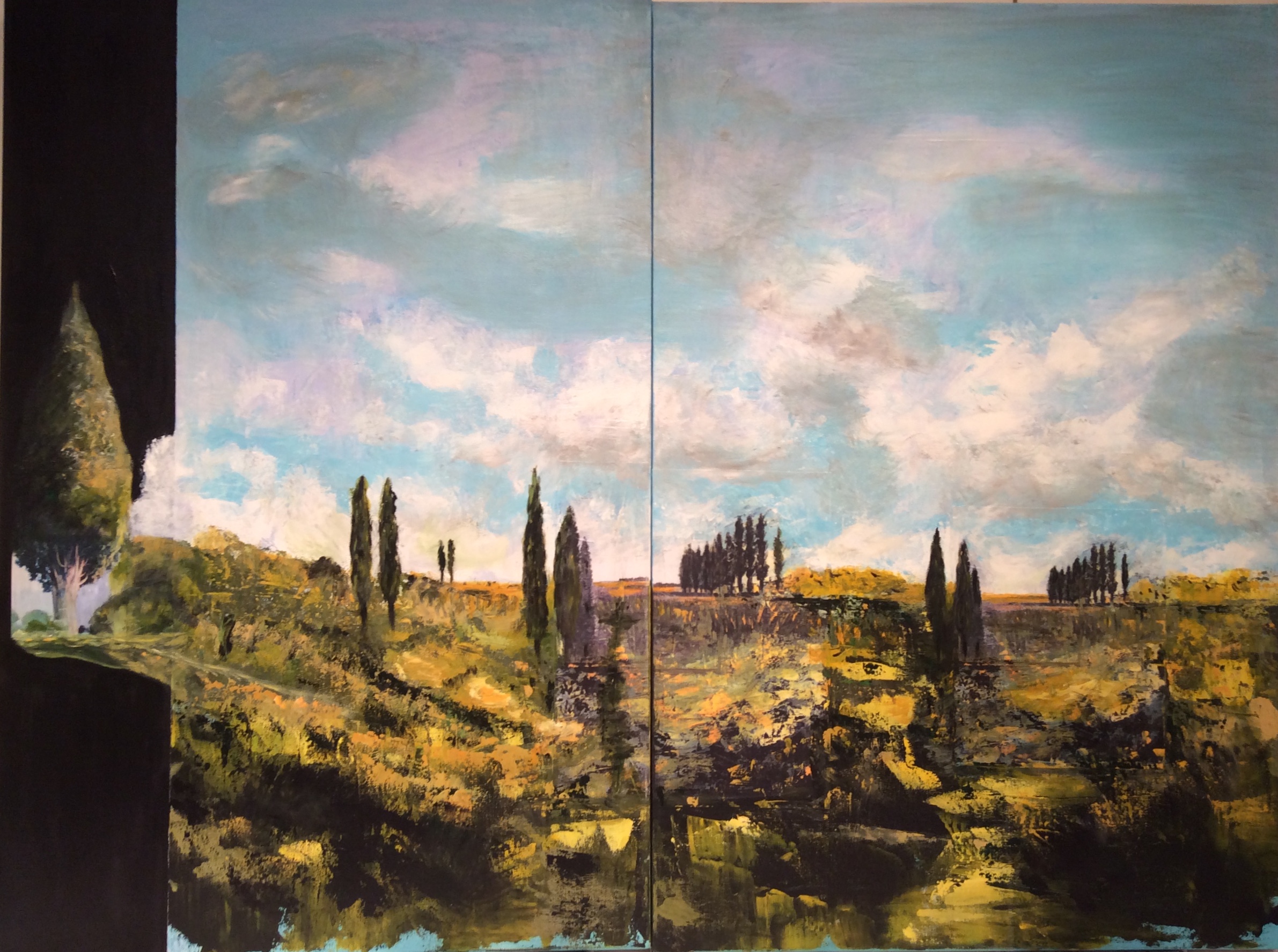 About the artist –Born and raised in Germany I had the great fortune to grow up in an artistic family. I have been creative since my childhood. After a move to Canada and the U.S., I pursued a career in Interior Design. After 9/11, I followed my dream of establishing a career in the art field. Extensive travel allowed me to convey my impressions and thoughts on canvas. Mostly self-taught I developed a following not only here in the U.S., but also in Europe and China.

Proceeds to benefit the Northern Illinois Food Bank, providing food to more than 71,500 people each week through a network of local food panties like the Salvation Army and feeding programs in 13 countries. 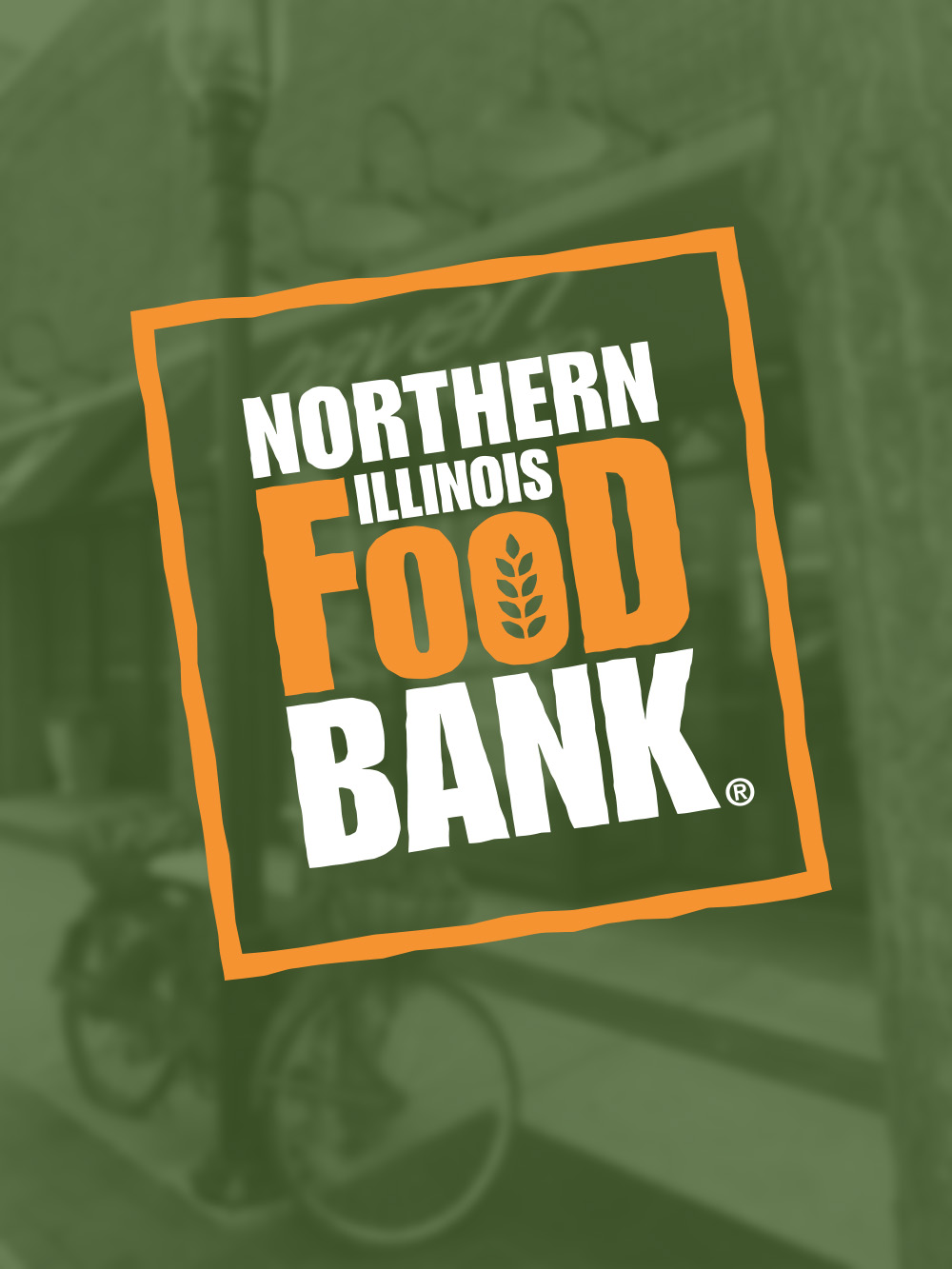 Haven Interiors Studio Gallery (Geneva, Ill.) has extended its partnership with gallery administration firm, Cultural Connection, for an exhibit of original paintings from local Chicagoland artist George Shipperley. The special gallery event with a new display of paintings will run from June 15th through January 14th.

Open Exhibit Reception: August 2, 4-7pm, opportunities for both visual and verbal dialogue with the art and artists from the “ARTiculation” exhibit, curator led tours of the art.

About The Artist
Fox Valley Arts Hall of Fame 2014, Winner, the Artist Magazine over 60 Art Competition 2013. First place in the signature class 2011, Oil Pastel Society. Featured in The Artist Magazine Jan/Feb 2011. Shipperley is a resident of Aurora and his works are inspired by “the poetry of nature, especially trees and how they relate to one another.” He believes the essence of a good work of art should reflect poetry and grace that stirs one’s emotions. The medium of choice that best reflects Shipperley’s interpretation is oil pastel.

Haven Interiors Studio – Geneva will be hosting a Business After Hours Social event along with co-host The Royal Wren. This event will run from 5:00pm-7:00pm in coordination with the Geneva Chamber of Commerce and is open to all Chamber members. We look forward to seeing you there. 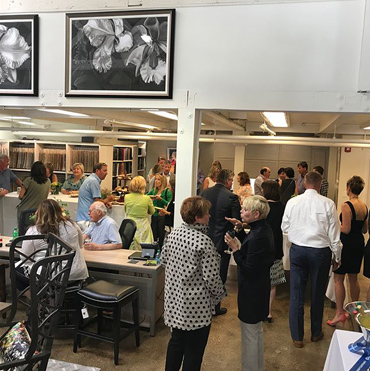 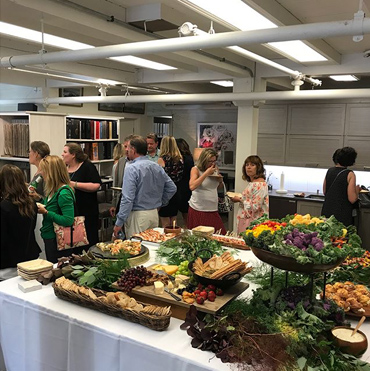 Haven Interiors Studio Gallery (Geneva, Ill.) is pleased to announce a partnership with gallery administration firm, Cultural Connection, for an exhibit of original paintings from four highly regarded local Chicagoland artist. The exhibit, titled – “ARTiculation – a visual dialogue by four artists”, reflects the innovative and diverse creative exploration each artist brings to their work. Together, they create a visual dialogue, inviting viewers into this subjective conversation. The special gallery event will run from March 16th through May 26th.

Open Exhibit Reception: March 22, 4-7pm, opportunities for both visual and verbal dialogue with the art and artists from the “ARTiculation” exhibit, curator led tours of the art, along with on-site music, appetizers, refreshments.

Ted Stanuga
About the artist – Strong, bold abstracts highlight Stanuga’s work both on paper and oils on canvas. Using expansive brush strokes, and graphically defined texture, his process is frequently referred to as “gestural abstraction, with drawing based in the nature of things”. Stanuga has received numerous awards and his work is included in private and corporate collections, as well as the Museum of Contemporary Art in Chicago and The Museum of Modern Art in San Francisco. 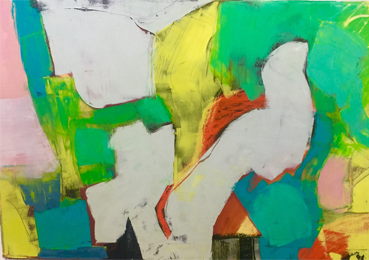 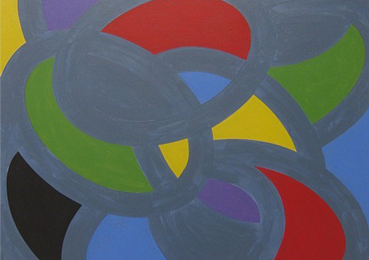 Corey Postiglione
Bio – A founding member of the Chicago Art Critics Association. He has taught at the Art Institute of Chicago, the University of Illinois at Chicago, the Illinois Institute of Technology and the Evanston Art Center. He is currently a tenured Associate Professor in the Department of Art and Design at Columbia College Chicago where he teaches Art History and Critical Theory as well as studio arts. Postiglione has curated numerous exhibitions and his critical writing has been published in Artforum, The New Art Examiner, Dialogue, and C-Magazine, Toronto. His work explores geometric abstracts, often with the motif of intertwined connectedness, as in his Tango Series – suggesting dance: its movement, precision and seduction. In addition to works from his Tango Series, pieces from his “Lines of Flight”, and Vortex series will be available.

Kathie Shaw
Kathie Shaw’s bio includes a BFA in Photography from Penn State University, an MFA in painting and drawing from the Art Institute of Chicago and an M Arch from the University of Illinois at Chicago. Her artwork expanded with initial influenced by textile design, scientific diagrams and architectural structures, and its relevance on the simplicity inherent to its abstractions. Currently focusing on the material act of painting itself by following “chance happenings”, curating that, and utilizing the “liquid quality of the paint”. All evolves in her “Chroma Topography series”, highlighted by her “Red Sky in the Morning” painting in the exhibit. 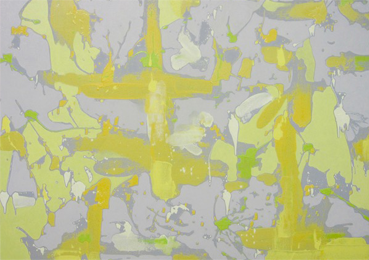 As an outreach for “making a difference”, Haven Interiors Studio will be donating five percent of all art sales during this exhibit to the Geneva Community Chest, www.genevacommunitychest.org . They are a 48 year old 501 (C) (3) independent, community -based charity with all volunteer members who provide aid and assistance to the lives of those in need around Geneva and the greater Fox Valley area by supporting twenty nine charitable organizations.

Additionally, the Haven Gallery is a gallery participant in the 2019 Fox River Arts Ramble that takes place Saturday April 13, Sunday April 14. This is a two day self-guided arts tour featuring numerous arts-related locations from Aurora to Elgin. More information on the Ramble can be obtained at the website www.foxriverarts.com

Haven Interiors Studio Gallery invites you to come visit at 15 S. 3rd Street Geneva, Il and we will help you make a selection from our inventory of over 100 works of arts. Personal art consultations available.

Let's talk about your next project.